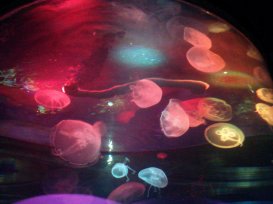 A few months ago I bought the kids and I annual passes to the Newport Aquarium. They have been a godsend on those days when it’s too hot to go to the park or pop on our bathing suits for a dip in the Little Miami. The chill of the penguin exhibit is a refreshing welcome from the stank that is a humid Cincinnati day, so we headed down there today.

As we walked through the exhibits battling the throngs of camp-goers and daytrippers, I found myself hurrying the kiddos along to try and stay ahead of the pack. “Hey, Mom…look at this cool river fish, “ Rhett would say in awe. “Very nice, honey,” I’d respond, “but let’s keep moving or you’ll never find a spot at the touch pond.” Getting my kids the ultimate experience was my goal, but I forgot to let them lead the way.

Jolie asked me at one point if I would like it if we were in the aquarium alone. “Of course,” I replied. “Wouldn’t that be neat? We could roam as we pleased, taking as much time as we wanted looking at all the fish…” I could see her jaw shift to the left, as it does when she is pondering something deep. She crossed her arms and said, “Maybe. But I kind of like it as it is…with everybody here.” The child had given me pause. And then I saw her point. There is a certain energy that comes when everybody is excited about the same thing, whether it be a six-year old knowingly pointing out the nurse shark from his Fly Guy book or a 36-year old gazing open-mouthed at the beautiful Moon Jellyfish.  The fact that we were all there to see some of the world’s coolest wildlife gave us a common purpose, something that created a buzz through each turn as we traveled deeper into the building.

This is something that I’ve been thinking about a lot lately—this sense of being alone versus being a creature who thrives in an environment with other creative minds. Working alone from home for the past 10 years has pigeonholed me into the “works independently” status, but I remember those days when I was a coordinator for one of the city’s coolest YP groups, planning events and hobnobbing with other young professionals. I also think about the amazingly creative ideas my sister and I have come up with whenever we combine our minds to work together on a project. I have to think that if I’m in an environment with other like-minded individuals, I’d be able to contribute in the same way.

As I retrace my steps to figure out how I got to where I am today, I’d like to incorporate that same spirit and joie de vivre that I had in my early twenties with the life experiences that I have in my mid-thirties. I don’t think that’s out of the realm of possibility, even if it requires me to say adieu to the solitary copyeditor in order to explore new adventures.

And so I say Bonjour, Destiny!, it’s nice to see you again.

I love you all, some more than others.